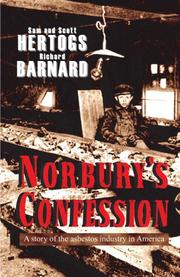 A story of the asbestos industry in America

A saga of two families from diverse geographic and socioeconomic backgrounds whose lives intersect because of the 20th-century asbestos scourge.

Privileged Robert Norbury has perfected the art of living well without doing a bit of work. His wealthy but distant parents enable his comfortable lifestyle…until his father discovers that he farms out his legal work to give himself more time to golf, and he summarily disinherits his loafing son. Robert, confident that he will win back his father, is stunned when his father succumbs to a heart attack or stroke. Robert changes his ways when his younger brother, an executive at Pittman-Simons, hires him as counsel. The newly impoverished son does everything in his power (he even hires some thugs) to ensure the financial well-being of his new employer. Despite his multitude of faults, bordering on the sociopathic, Robert remains likable; his charms make up for his flaws. In contrast, hundreds of miles away in Minnesota, the Lambie family lives simply on a farm outside Minneapolis. In the post–World War II boom years, Bill Lambie works in heating, ventilation and air conditioning. On at least one construction site, asbestos fibers rain down on him. Bill’s diagnosis of mesothelioma guarantees these two families will meet, and the fortunes of Pittman-Simons will change. Spanning the majority of the 20th century (and tracing the Norbury history back to 1815 Britain), the novel covers not just the history of asbestos use in the U.S., but World Wars I and II and accompanying social changes. The abundance of back story and tangents work well, and the inevitable lawsuit seems almost anticlimactic. The authors list the multitude of characters, many of whom are not necessary, in the back of the book (along with family trees). The narrative is far less political than the subtitle suggests and is an engrossing read.

A fulfilling story about the efforts of one man to triumph over the corruption of big business.