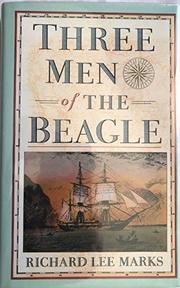 THREE MEN OF THE BEAGLE

The three men are Charles Darwin, Beagle Captain Robert FitzRoy, and a Tierra del Fuegian island Yahgan Indian taken hostage, along with several others, on an earlier Beagle voyage. In reality, the book is about this native, named Jemmy Button by FitzRoy, and only incidentally and speculatively about the other two. Button was a boy when FitzRoy brought him the England with the intention of educating him and the others, making them Christians, and returning them to South America to serve as bridges to culture. FitzRoy, himself a devout believer, would be aided and abetted by missionaries who later formed the Patagonian Mission. The well-dressed Button and his companions were subsequently returned to their homeland and, it seems, quickly reverted to the old life style. Years later we meet Button again as one of a group of natives persuaded or commanded to attend a missionary camp on one of the Falkland Islands and later returned. Still later, there is a harrowing massacre of missionaries for which a survivor blames Button. By this time, however, political sentiment and economic interests in the Falklands were not so sympathetic to the mission and the forced settlement of Indians: Nothing happened to Button—except that he died of smallpox in 1864, preceding the eventual extinction of the race itself. And that is the story that Marks, author of two novels published in the 1950's, who ``wildcats for oil and natural gas,'' embroiders with much psychologizing and much limning of Yaghan society as nature raw in tooth and claw (yet possessed, it seems, of a rich language). In the end we hear about the career setbacks and depressions that led to FitzRoy's suicide and read about Darwin's fame and fortunes. (Marks would like us to believe that FitzRoy and Darwin were tied in a lifelong tension of friendship/conflict.) True, there are accounts of incredible personalities, brave missionaries, and skilled sea captains, but the whole saga smacks of a very b&w late-night movie.