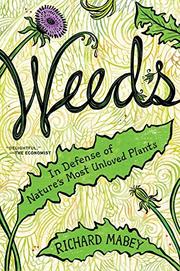 In Defense of Nature's Most Unloved Plants

British nature writer and popular BBC personality Mabey (Unofficial Countryside, 2010, etc.) cultivates an intriguing mix of natural history, botany and anecdotes from the frontlines of his own weed-infested garden.

A weed is often defined as “a plant in the wrong place,” writes the author at the beginning of this loving and lyrical tribute to those he refers to as “botanical thugs.” He goes on to discuss how weeds originate, since the source of and paths traveled by various seeds can often be traced, much like a family lineage. Through his examination of the historical hows and whys of seed travel, the author artfully explains how these jet-lagged seeds can create unique gardens anywhere from marshy river banks to desolate, cracked parking lots. His engaging writing style transforms what might otherwise be a stodgy, uninteresting field guide into a literary stroll through an English garden. Mabey may be pro-weed, but his gentle voice is oddly persuasive, reminding readers that weeds are nothing more than “a plant growing where you would prefer other plants to grow, or sometimes no plants at all,” and “the victims of guilt by association, and seen as sharing the dubious character of the company they keep.” Throughout the ages, weeds have been both praised for their healing measures and feared for their “seemingly diabolical powers.” Regardless how their worth is perceived, none can deny the inspiration they’ve provided throughout the annals of history as important figures in history and literature. Shakespeare, for example, mentions more than 100 species of wild plant in his works. Mabey’s deft and spirited treatise on nature’s supervillains will have readers remembering A.A. Milne’s defense of weeds in Winnie the Pooh: “Weeds are flowers too, once you get to know them.”

Transforms a much-maligned annoyance into a topic worthy of fascination.