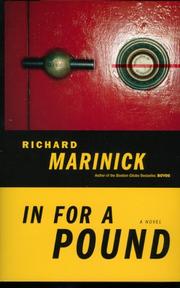 IN FOR A POUND

An ex-cop/ex-con does a friend a favor that threatens to make him expendable.

Delray McCauley works the bar in a South Boston bistro, and happy he is to be there. Three months ago, he was in the slammer, finishing a three-year stretch he didn’t deserve. Everyone knows stalwart, stoical McCauley was scapegoated, but he’s managed to rise above bitterness. Now his old friend, Boston PD Captain Conway Lilly, comes to him with a problem involving a stolen safe and the politically explosive CD that lawyer Edmond Cotter has imprudently stashed in it. Lilly wants McCauley to dust off the investigative talents for which he was once justly famous and employ them in Cotter’s behalf. “I’d sooner work for the Klan,” says McCauley, who detests lawyers on principle. Lilly, however, persists and eventually succeeds—mostly because McCauley, Southie born and bred, regards friendship as a high calling in his good old neighborhood. Having signed on, McCauley is soon in harm’s way. Old enemies recalling old wounds relish fresh opportunities for payback. On the other hand, there’s the undeniable pleasure of being back in harness—and finally, when he least expects it, the heady reward of vindication.

Though this follow-up lacks the force and dark atmospherics of Marinick’s impressive debut (Boyos, 2004), the solid storytelling will hook you and keep you.