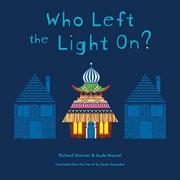 WHO LEFT THE LIGHT ON?

The unseen inhabitants follow suit: “At sundown, the neighbors close their shutters—goodnight! / At daybreak, they open them—oh so polite.” The identical houses, created in what appears to be digital collage and arranged in a geometric grid, give the initial pages a quiltlike appearance, the compositions flat but appealing. “But then one night…someone leaves on their light! / And in the morning, what a shock! / The shutters are sealed tight!” The neighbors gossip about this “irksome behavior,” but soon the rebel leaves. The house falls into disrepair, and the town destroys it. They eventually come back, with architectural elements gathered from the world over, and construct a “comical” house with a Russian onion dome, Dutch windmill vanes, and the upturned eaves of a Japanese temple roof, all above similarly disparate features. Yes, some of the elements are stereotypical, but the “oddball’s” creativity starts the ball rolling. Beginning with blue shutters on one house, everyone starts innovating. There’s “an open-air bathroom” and “a house made of sticks.” The houses grow ever more idiosyncratic, and soon the comical house doesn’t stand out at all. This translation from the French, told in simple rhyme, will inspire young architects to think outside the box.

From little variations in habit, big changes occur, and everyone seems happier, including young readers.