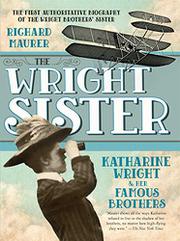 Katharine Wright and Her Famous Brothers

Not many people know that Orville and Wilbur Wright had a third member of the team. Katharine, their younger sister, ran the house after their mother died and became her brothers’ social and business manager when their careers took flight. In this first authoritative biography of her life, much ground (and air) is covered. It’s the story of Kitty Hawk and flying machines and an opinionated young woman devoted to her father and brothers, who only later in life married and found personal happiness. Maurer does justice to this pivotal member of the famous family. Balancing the story of early flight with Katharine’s story, much is revealed about the role of women at the turn of the century and the restricted opportunities for education and careers. Katharine managed to receive a first-rate education at Oberlin College and became only the second woman elected to Oberlin’s board of trustees, where one of her causes was to have women faculty members paid the same as men. Though the print is undersized, the format and design are attractive, with many photographs capturing the drama of the Wrights’ lives. The text is competently written, and if the account doesn’t quite soar like Katharine’s brothers, it does clearly portray Katharine’s worldly concerns with career, marriage, and the care of her family. A bibliography is included, but without attribution of specific quotations and incidents and no sources for young readers. Nevertheless, this is an important biography of a woman who also had the Wright stuff. (author’s note, index) (Nonfiction. 10-14)