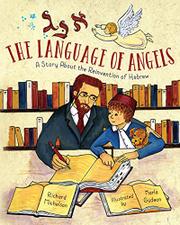 THE LANGUAGE OF ANGELS

A Story About the Reinvention of Hebrew

In 1885 Jerusalem, a young boy named Ben-Zion cannot converse with the polyglot children of his age because his father has decreed that he speak only Hebrew, “the first child in more than two thousand years” to do so. The father, Eliezer Ben-Yehuda, is a Zionist immigrant to Palestine and fervently believes that Jews from every country, speaking so many different languages, should return to the language of their ancestors and of Jewish Scripture. Ben-Zion is not popular in the neighborhood; some consider Hebrew a holy tongue to be used only in prayer. The father persists and finds that he needs to invent words to modernize the ancient language. Thus, by combining the Hebrew words for “wheel” and for “a pair of” he creates a word for bicycle. Ben-Yehuda’s work leads to a network of schools, a dictionary, and the eventual designation of Hebrew in 1948 as the national language of Israel. Michelson’s account, based on history, is presented as a story with invented dialogue, which he addresses in his author’s note. Gudeon’s digitized watercolor illustrations, full of children, are lively and feature Hebrew words and letters as part of the page design.

A lively introduction to the work of a Hebrew language scholar and lover—and his family.