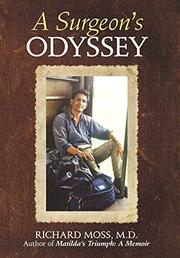 In this memoir, a newly certified New York City ear, nose, and throat specialist goes to Thailand to help the underprivileged and learn about the world and himself.

As one of five sons of a divorced mother, Moss grew up in the mean streets of the Bronx with little reason to expect that he’d someday get a degree in medicine. However, after overcoming several roadblocks and changes of mind, he committed himself to long years of medical study. Even after achieving his goal of becoming an otolaryngological surgeon, he was faced with an agonizing choice—set up a practice and start making good money or travel to a less-developed country and assist those in desperate need. Urged on by his interest in Eastern religion and a timely fortune cookie at a Chinese restaurant (“Do not forsake your dreams for material security”), he took a job at a clinic in northern Thailand. Young and inexperienced, he dealt with horrific cancers and infections and an overwhelming lack of resources. However, he was deeply impressed with his colleagues’ resourcefulness and his patients’ calm acceptance of their conditions. He also fell in love with the leisurely pace of Thailand, where people walked more slowly than they did in New York. As he continued his practice in Nepal, India, and Bangladesh, Richard learned from his patients, other native people, and expatriates, and he even unexpectedly got married along the way. Overall, Moss (Matilda’s Triumph, 2013, etc.) has constructed a moving and persuasive memoir that will draw the reader in from the very first chapter. By interspersing italicized flashbacks of his early life among his evolving experiences in foreign lands, he adds texture and depth to both storylines. His portraits of the people he meets, his chronicle of his spiritual development, and his anecdotes about occasional culture clashes are all vivid and compelling. Some of the clinical and surgical scenes are grisly, but many also have the urgency and drama of an episode of ER—if not the pat, happy ending that such fiction often provides.

An engaging account of a three-year odyssey of medicine and personal growth in the East.