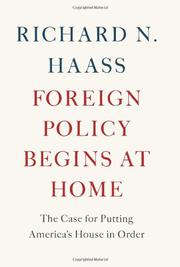 The Case for Putting America's House in Order

Council on Foreign Relations president Haass (War of Necessity, War of Choice: A Memoir of Two Iraq Wars, 2010, etc.) makes the case for “a new approach to domestic and foreign policy.”

The author states from the outset that the United States “must restore the domestic foundations of its power” if it is to continue to act successfully abroad. He argues for a rebalancing of issues that bridge domestic and foreign policy. The U.S. could then operate under more realistic premises, less ready to deploy military force “in large-scale, military-dominated experiments.” Haass points out that the wars in Iraq and Afghanistan account for “15 percent of the debt accumulated since 2001” and that “imperial overstretch is, at most, a contributing cause of America’s economic predicament.” Since no power, or combination of powers, represents an existential threat, and great power conflict is unlikely for the foreseeable future, the author concludes that there is an opportunity to restore the sources of foreign power through rebuilding domestically: Restore solvency, encourage domestic energy production and the growth of trade and investment, rebuild domestic infrastructure, and focus on education in citizenship. Haass also notes that there would be further consequences for foreign policy as resources were increased to meet internal as opposed to international challenges—e.g., the current focus on the Middle East and large-scale land wars would need to be reassessed. The author advocates caution in pursuing doctrinal goals, such as the promotion of democracy, arguing that outcomes should not be artificially predefined or constrained by any single path or sequence of events. He hopes “abstractions and optimism do not overwhelm assessments of national interests and realities.”

Lessons learned from the recent past and presented thoughtfully as a viable new course.