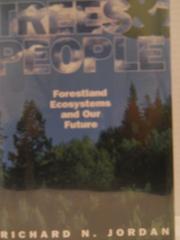 A contribution to the debate over professional forestry's environmental impact by someone who believes that people take better care of trees than nature does. The US Forestry Service—and professional forestry in general- -has come under heavy fire in recent years for, among other sins, the irresponsible destruction of trees. Jordan, who has worked for 40 years in the forest products industry, argues that environmentalists and government regulations are standing in the way of healthy, sustainable forests. He takes as a hopeful sign President Clinton's 1993 Forestry Conference, which attempted to find a common ground between conflicting environmental and economic demands. Some kind of resolution is necessary, Jordan argues, if the forest-products industry is to continue to fulfill the American Dream by supplying cheap housing and consumer goods. In 1993, Jordan asserts, 129,000 people were busy writing 66,000 pages of federal regulations, many of which were contradictory. Worse still, in his view, Congress is designating countless acres as national wilderness or protected parkland. Nature rules in these areas, states Jordan, causing ``catastrophic `clearcuts' through the devastating ravages of wildfires, hurricanes, insects, disease and old age,'' while in the hands of private industry these same areas would have watershed protection, erosion control, care of wildlife and plant habitat, recreational opportunity, and, most important, stewardship of a valuable renewable raw material. He calls for a national campaign on the part of the forest-products industry to spread the word about its successes, combat its negative public image, and cultivate grassroots support. Jordan is an articulate and fervent advocate of sustainable forestry, and his perspective on the issues is refreshingly different, but he fails to adequately address such major environmental concerns as the loss of genetic diversity among forest trees. A valid comment, but far from the final word on the fate of our forests. (Photos, not seen)