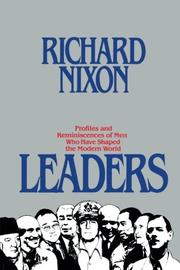 Recollections of Churchill, de Gaulle, Khrushchev, et al. recycled from RN – plus biographical material from the public domain and a few thoughts on leadership by which Nixon identifies himself with his subjects.  The great political leader must be willing “to risk all to gain all”; to endure opprobrium; to spend years “in the wilderness.”  (In all these respects, see also Adenauer.)  Two of the lesser lights in Nixon’s pantheon – Japan’s Yoshida, Italy’s de Gasperi – resisted radicalism; two – Australia’s Menzies, Singapore’s Lee – were champions of free enterprise who made their countries rich.  (“The pursuit of affluence is much ridiculed by those who have never known the absence of it.”)  Other cross-comparisons, endemic throughout, are simply extensions of Nixon’s hackneyed characterizations or his connect-the-dot grasp of history:  “If David Ben-Gurion was an elemental force of history, Golda Meir was an elemental force of nature.”  “Like Ghana’s Nkrumah, Indonesia’s Sukarno proved a disaster once independence was secured.  Both could destroy; neither could build.”  Furthermore:  Chou was charming, Mao earthy; Chiang orderly, Mao slovenly.  And Mao, “like most revolutionary leaders, could destroy but could not build.”  Much of the book, however, consists of stock biographical data, stock anecdotes, or stock quotes.  Even Nixon’s ostentatious dissents from the common view are pat:  de Gaulle’s reputed arrogance notwithstanding, “I found him to be a very kind man…I would say he was almost gentle”; “in spite of [Adenauer’s] outward austerity…he was a warm, good-humored, gentle man.”  The close-Nixon-watcher might indeed find his admiration for de Gaulle and Adenauer of some interest.  (Both are lauded as family men; both befriended him when he was out of office.)  But for a self-proclaimed avid reader of history (another attribute of leadership), he is remarkably unaware that others have heard his story of the “kitchen debate” with Khrushchev before, or also know that Churchill and de Gaulle were “voices in the wilderness” in the Thirties.  And it would be beyond his ken that some might not equate his defeat for the California governorship with their warnings against the Nazi rise.  Pretty tiresome, even for the sympathetically-inclined.