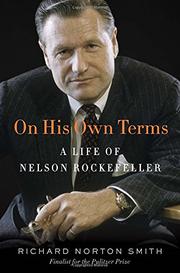 A Life of Nelson Rockefeller

Grandson and namesake of the two most hated men in Progressive-era America, Nelson Aldrich Rockefeller (1908-1979) was determined "to succeed despite his name” and to "polish the Rockefeller legacy like fine silver" through public service and the socially responsible use of the immense wealth and influence at his disposal. Rockefeller was the last of the titans of progressive Republicanism. "He had long believed that his country, like his family, must justify its riches through good works and the sharing of wealth,” writes Smith. He worked comfortably in appointed positions in Republican and Democratic administrations but ultimately "hungered for the legitimacy uniquely bestowed by the ballot box." As governor of New York, Rockefeller advanced measures combating discrimination in various forms and engaged in a building boom, much of it financed through constitutionally dodgy bonding schemes. In national politics, however, Rockefeller ultimately proved too liberal for the Republicans, the pillar of the "eastern establishment" at a time when the party was becoming more stridently conservative. In person, Rockefeller was a force of nature—optimistic, impatient, hard-charging and strikingly virile, engaging in sex with subordinates in a way that would never be hidden or tolerated today. Ironically, his presidential hopes were scotched by his very public divorce and remarriage, along with a considerable measure of tactical ineptitude. Rockefeller's enormously full life as a diplomat, bureaucrat, politician, businessman, and avid collector and proponent of modern art justifies the prodigious scale of this intensively researched work, presented in sturdy, confident prose with the occasional well-placed barb. The author maintains a dignified objectivity throughout, recounting events with penetrating perceptivity but refraining from intrusive editorial comment or analysis.

An overdue comprehensive biography of a giant of mid-20th-century American politics.