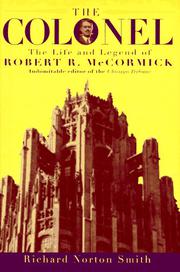 The epic story of the the contentious publisher and fervent conservative who, along with William Randolph Hearst, was a model for Orson Welles's Citizen Kane. In its heyday, writes Smith (Patriarch, 1993, etc.), there was no paper quite like the Chicago Tribune, the self-proclaimed World's Greatest Newspaper, and McCormick, its editor and publisher, made himself synonymous with the Windy City. At once acerbic and empathetic, the multifaceted Colonel lived many lives- -city official, soldier, inventor, historian, and publisher—but, Smith observes, it is as the begetter of controversies that he is best remembered. McCormick, who joined the Tribune as treasurer after working as president of the Chicago Sanitary District, picked up where his contentious predecessor, maternal grandfather, and early Tribune editor Joseph Medill, left off. Serving in France in 1917, Bert McCormick was promoted to lieutenant colonel and saw heavy action. Returned stateside and established in his sanctum on the 24th floor of the new Tribune Tower, he found in Hoover and Prohibition (and, later, the New Deal Democrats) confirmation of his worst fear: ``an overreaching government enacting laws that resulted in unprecedented lawlessness.'' McCormick's Tribune, a bible to hundreds of small-town editorial writers, waged ceaseless battle with the Colonel's Groton classmate FDR, courting White House ire with revelations of US military plans on the eve of Pearl Harbor and later coming within a hairsbreadth of an espionage indictment over reporting on the Battle of Midway. Consumed with concerns over labor and succession at the Tribune, McCormick spent his final years ``marooned,'' like Kane, a man out of his time. Smith, the first biographer with access to the Colonel's private papers, orchestrates, with an objective eye for ironic detail and a firm grasp of events and their significance, a vivid ensemble of characters on a domestic and international stage. An indispensable guide to an outsize character and his era. (16 pages b&w photos, not seen)