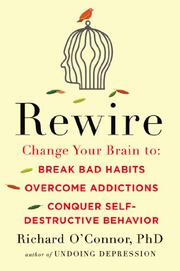 A self-help manual for those who wish to overcome destructive behavioral patterns.

Psychotherapist O'Connor (Undoing Depression: What Therapy Doesn't Teach You and Education Can't Give You, 2010, etc.) presents exercises to help readers overcome destructive behavior that has become habitual. He buttresses his claim by referencing Israeli-American psychologist Daniel Kahneman's thesis that there are two systems of thinking that govern our mental processes: The first is a rapid, automatic response, such as that used by an athlete in a high-pressure situation, and the second is a slower process of conscious reflection. “[O]ur choices and actions are much more influenced by unconscious processes than we feel comfortable admitting to ourselves,” writes O'Connor. However, he differs from Kahneman, who “argues that self-control is of necessity an act of the conscious mind.” O’Connor writes that “with time and repetition, it can become more and more a part of the automatic self, so that it becomes easier to practice.” The author supports his contention by referencing research on the remarkable plasticity of the human brain, which can rewire its neural circuitry to compensate for brain injury. His proposed exercises include keeping a daily journal and practicing mindfulness meditations in order to suppress impulsive behavior. Others involve transforming social relationships through small steps—e.g. striving for honesty rather than accommodation, becoming self-assertive where appropriate—and he recommends strengthening will power by avoiding triggers—e.g., alcoholics should stay out of bars and avoid friends who act as enablers. If done regularly, these exercises can reveal habitual patterns of self-destructive behavior and play a part in removing the need “to distort our world through psychological defenses.”

A useful addition to the popular psychology shelf, although readers acquainted with self-help literature may find the exercises overly familiar.