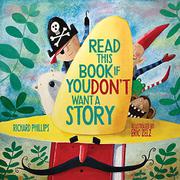 READ THIS BOOK IF YOU DON'T WANT A STORY

What chance does a blocked narrator have when all the words, characters, readers, and even the page numbers gather round to offer motivation?

Having a codex for a body but otherwise bearing an ill-considered resemblance to the Frito Bandito, “The Book With No Story” opens with a scenery-chewing tally of what not to expect: ”I’ll show you no pictures, no scares and no thrills, / no cows on trapezes, no fish with big gills, / no polar bears on snowboards, no quacking duck bills….” This list is interrupted at, literally, every turn by argumentative page numbers and a burgeoning cast of characters…led by a huge polar bear. Book’s stubborn refusal to cooperate only lasts until the chorus invites a diverse squad of young readers to join in a group bear hug, then a hearty shake that gets the creative juices flowing. Though in his mix of verse and prose Phillips isn’t much for regular cadences, he does have a way with quick, galloping rhyme. He also strews this meta-tale with enticing story starters (“Once upon a time, Prince Pork Chop Lover discovered that Princess Leaping Pickle had been kidnapped by a Giant Woolly Tundra Snail”) and closes with words of encouragement to all young storysmiths: “Imagine a poem. / Imagine a play. / But don’t ever imagine / you have nothing to say.”

A decent-enough addition to the shelf of stories about stories, marred only by a questionable choice from the illustrator.