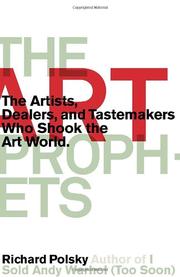 The Artists, Dealers, and Tastemakers Who Shook the Art World

The author of I Sold Andy Warhol (Too Soon) (2009) returns with a paean to the prophets who saw profits in genres of art that were then outside the mainstream.

After defining his concept of “art prophet,” Polsky (Boneheads: My Search for T. Rex, 2011, etc.)—once a gallery owner, now a private dealer—begins his genre journey with Ivan Karp, who discovered Warhol and in some sense propelled public interest in pop art. Then the author moves on to the career of comic-book pioneer Stan Lee and traces the history of that genre from its origins to R. Crumb and graphic novels. Next, he looks at those out in San Francisco who helped create the art of the poster in the 1960s, explores the story of Peter Max and talks about Shepard Fairey’s poster of candidate Barack Obama that proved so popular—and litigious. In a sense, all of the artists Polsky discusses are/were outsiders, but he devotes a chapter to the real outsiders—people with no formal training whose works eventually commanded impressive sums at sales. The author continues with a look at Native American art, earthworks (Polsky got to see Robert Samuelson’s Spiral Jetty when that massive work emerged once again from the Great Salt Lake that had covered it over in high-water days), ceramics (which had to overcome its “craft” label), photography (featuring Diane Arbus and Richard Avedon), photorealistic painting and street art. In each chapter, Polsky celebrates the individual(s)—dealers, collectors, gallery owners—who first took a chance on that genre, tells us a bit about the early and most significant artists and considers the current status and challenges facing the genre. Unfortunately, the text includes no images of the works he references. Clear, concise and energized by the author’s fiery passion for his subject.