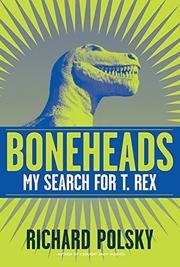 My Search for T. rex

A successful art enthusiast finds his true calling in the quest for dinosaur remains.

At age 50, author and art columnist Polsky (I Sold Andy Warhol (Too Soon), 2009, etc.) took a good look at his extensive yet stagnant 25-year career as an art dealer and decided to dive into his true life’s passion of dinosaur exploration. To realize his goal of unearthing the skeletal remains of a Tyrannosaurus rex, the author enlisted the aid of seasoned paleontologist Henry Galiano, who cautioned him about the competitiveness of the dinosaur-hunting community. Galiano officially navigated Polsky through his first trade convention, and the author met with commercial fossil dealer Mike Triebold, “fossil king” Bob Detrich and Maurice Williams, the owner of the land where the legendary “Sue” T-rex skeleton was excavated in 1990. When Galiano and fellow paleontologist Peter Larson declined to participate in his frenzied endeavor, Polsky was crestfallen, especially when his luck (and time) ran out while scraping across Williams’ hallowed property in the South Dakota badlands. Exasperated yet undeterred, the author regrouped with an overconfident Detrich to assemble a ragtag party of die-hard fossil hunters (“boneheads”), including a pair of bickering fraternal twin brothers and rancher Bucky Derflinger, who became the youngest person to discover (and sell) a T. rex. Polsky takes distinct delight in writing about the history of paleontology, pricey dinosaur casts, a rumored T. rex “curse” and the general frustration felt when confronted with a declining seller’s market due to the saturation of online marketplaces. Whether successful or not, the author’s fortitude remains palpable. He writes with earnest and lighthearted exuberance, expressing an obvious love of the hunt, even during the most hopeless moments of his spirited adventure.

Both a briskly guided tour of a fading industry and a vibrant example of self-discovery.