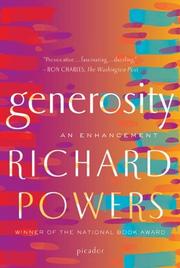 Nothing less than the phenomenon of happiness is explored in this rich, challenging novel from polymathic Powers (The Echo Maker, 2006, etc.).

Think of it as an extended Socratic or Platonic dialogue, animated and communicated by three generously imagined characters. The central contrasting figures are Thassadit Amzwar, an inexplicably optimistic and upbeat refugee from the horrors of ongoing ethnic and other conflicts in the northern African powder keg of Algeria, whose student visa brings her by way of Canada to Chicago and the “creative nonfiction” adult-education class (“Journal and Journey”) taught by failed fiction writer and generally downcast would-be autodidact Russell Stone. Thassa’s fellow students, a motley gathering of borderline-hopeful underachievers, suspect she’s nuts and dub her “the Bliss Chick.” But Russell believes there’s something really different about this irrepressible survivor of unthinkable calamity, as does the novel’s third major character and de facto antagonist, Thomas Kurton, a young scientific phenom who grows up to become a celebrity geneticist whose search for a “happiness gene” is chronicled in a widely seen film and who hopes to appropriate the luminously cheerful Algerian to star in his researches. A lesser writer might have made this a 21st-century Frankenstein. Powers instead channels his heady confluence of ideals and motives into suspenseful intellectual drama, set in painstakingly realistic Middle-American urban jungles populated by intelligent, well-meaning people who aim to do good by any means necessary. Even the irresistible Thassa comes abrasively alive, in her exasperated response to Christian fundamentalists determined to claim her as one of their own: “I’m a Maghreb Algerian Kabyle Catholic Atheist French Canadian on a student visa. I can’t help these people.” The mystery of Thassa’s impermeable optimism is never explained; it neither should nor could be.