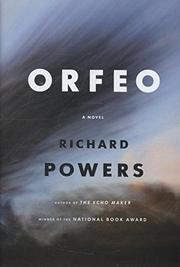 The earmarks of the renowned novelist’s work are here—the impressive intellect, the patterns connecting music and science and so much else, the classical grounding of the narrative—but rarely have his novels been so tightly focused and emotionally compelling.

With his “genius” certified by a MacArthur grant, Powers (Generosity, 2009, etc.) has a tendency to intimidate some readers with novels overstuffed with ideas that tend to unfold like multilayered puzzles. His new one (and first for a new publisher) might be a good place for newcomers to begin while rewarding the allegiance of his faithful readership. His Orpheus of the updated Greek myth (which the novel only loosely follows) is a postmodern composer who lost his family to his musical quest; his teaching position to his age and the economy; and his early aspirations to study chemistry to the love of a musical woman who left him. At the start of the novel, he is pursuing his recent hobby in his home lab as “a do-it-yourself genetic engineer,” hoping for “only one thing before he dies: to break free of time and hear the future.” Otherwise, his motives remain a mystery to the reader and to the novel’s other characters, particularly after discovery of his DNA experiments (following the death of his faithful dog and musical companion, Fidelio) sends him on the lam as a suspected bioterrorist and turns his story viral. While rooted in Greek mythology, this is a very contemporary story of cybertechnology, fear run rampant, political repression of art and the essence of music (its progression, its timelessness). “How did music trick the body into thinking it had a soul?” asks protagonist Peter Els, surely one of the most soulful characters that the novelist has ever conjured. Els looks back over his life for much of the narrative, showing how his values, priorities, quests and misjudgments have (inevitably?) put him into the predicament where he finds itself.

By the author’s standards, this is taut, trim storytelling, though it characteristically makes all sorts of connections and proceeds on a number of different levels.