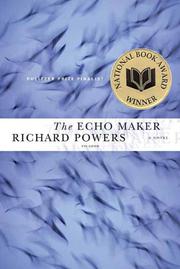 The theme of cognitive disorder, variously explored in Powers’s forbiddingly brainy earlier fiction, is the central subject of his eerie, accomplished ninth novel.

An image of sand-hill cranes migrating from Nebraska’s Platte River sets the scene, where 20-something slaughterhouse-worker Mark Schluter crashes his truck in an adjacent field, sustaining severe bodily and neurological injuries. Repeating an all-too-familiar pattern, Mark’s older sister Karin leaves her job and life in Sioux City to be with him—stirring up memories of their shared childhood in thrall to a violent, alcoholic father and religious zealot mother. But Mark (whose inchoate, terrified viewpoint is rendered in a rich mélange of semi-coherent thoughts and visions) no longer knows Karin; he is, in fact, convinced she’s a stranger masquerading as his sister. Eventually, he’s diagnosed as suffering from “Capgras syndrome . . . one of a family of misidentification delusions.” But Mark’s symptoms elude the pattern familiar to Gerald Weber, a prominent New York cognitive neurologist and bestselling author, summoned by Karin’s importuning letter. Weber’s “tests” fail to relieve or explain Mark’s delusive paranoia, and Karin turns first to the siblings’ former childhood friend Daniel Riegel, long since estranged from Mark, now a deeply committed environmental activist; then to her former lover Robert Karsh, a manipulative charmer who has risen to local prominence as a successful developer. Contrasts thus established seem pat, but Powers explores the mystery surrounding Mark through suspenseful sequences involving his raucous drinking buddies (who may know more about his accident than they’re telling); compassionate caregiver Barbara Gillespie; and the unidentified observer who left a cryptic message about Mark’s ordeal at the patient’s hospital bedside. Issues of environmental stewardship and rapine, compulsions implicit in migratory patterns and Weber’s changing concept of the fluid, susceptible nature of the self are sharply dramatized in a fascinating dance of ideas.

One of our best novelists (The Time of Our Singing, 2003, etc.) once again extends his unparalleled range.