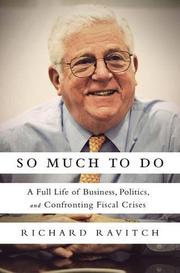 SO MUCH TO DO

A Full Life of Business, Politics, and Confronting Fiscal Crises

An exemplary public servant recounts his eventful life at the intersection of business and politics.

In October 1975, with New York City facing bankruptcy, the president announced there would be no federal bailout. The Daily News headline famously translated his declaration as, “FORD TO CITY: DROP DEAD.” Meanwhile, at the behest of Gov. Hugh Carey, Ravitch, among others, worked furiously to rescue the city. He had done this sort of financial troubleshooting before as head of the state’s Urban Development Corporation and would do so again as chairman of the Metropolitan Transportation Authority and as lieutenant governor. Offering little about his personal life, Ravitch shuttles among stories about these and other high-profile public sector jobs and his work helming his family’s successful real estate development business, heading the Bowery Savings Bank and serving as the chief labor negotiator for Major League Baseball. A parade of famous names marches through the narrative, especially New York politicos—Rockefeller, Lindsay, Carey, Koch, Dinkins, Moynihan—but those looking for dish will be disappointed. With the exceptions of the Cuomos, father and son, Ravitch has little but good to say about his mentors and co-workers. Indeed, readers are surprised when he describes Joe DiMaggio as “a fairly boring fellow.” For the most part, this story features banks and budgets, credit and contracts, finance and finagling, unions and elected officials, negotiations and agreements. From these dull materials—albeit matters critical to the successful operation of our municipalities and states—Ravitch draws some lessons about our need to understand the true costs of public benefits, about balancing revenues and expenditures, and about the consequences of our failure to invest in education and infrastructure. He underlines the importance of our often messy political process and the necessity of establishing sound relationships to influence public policy, and he makes a plea for greater civic engagement.

For policy wonks and readers with a particular interest in New York.