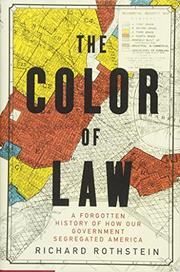 THE COLOR OF LAW

A Forgotten History of How Our Government Segregated America

How government policies have perpetuated the caste system of slavery.

Rothstein (Grading Education: Getting Accountability Right, 2008, etc.), a research associate at the Economic Policy Institute and a fellow at the Thurgood Marshall Institute of the NAACP Legal Defense Fund, mounts a hard-hitting argument condemning federal, state, and local governments for devising laws that enforce segregation. Underserved, blighted African-American communities, he argues persuasively, are not the result only of personal prejudice or market forces but of unconstitutional “racially explicit government policies to segregate our metropolitan areas.” The author cites cases and decisions regarding public housing, racial zoning, mortgage lending, the enforcement of housing covenants, fearmongering to incite white flight, planning for highways and roads, IRS tax-exemption status for institutions that promote segregation, state-sanctioned violence, and the effects of segregation on schools and income disparity. Although he sometimes refers to particular individuals, his main focus is on law and public policy affecting neighborhoods. In 1949, for example, when a proposed integration amendment to a public housing law threatened to be defeated by Southern Democrats, liberals caved, voting for a program that stipulated segregation rather than giving up the possibility of much-needed public housing. State supreme courts consistently upheld restrictive real estate covenants that forbade sales of homes to African-Americans, claiming that such “private agreements” did not violate the Constitution. Even after the U.S. Supreme Court ruled that restrictive covenants did, indeed, violate the 14th Amendment, the Federal Housing Administration continued to deny mortgage insurance to homes in integrated neighborhoods. After World War II, the GI Bill denied African-Americans mortgage subsidies and opportunities for education and training that were available to whites. Rothstein considers the insidious effects of housing segregation on economic mobility, infrastructure, and politics. “Racial polarization,” he asserts, bolsters leaders who appeal to white voters’ “sense of racial entitlement” and who foster intolerance.

An informed, important exposé of the nation’s institutionalized racism that would have been even more reader-friendly with the inclusion of more individual case histories.