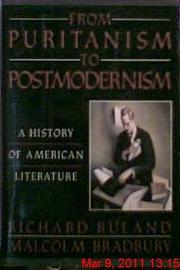 FROM PURITANISM TO POSTMODERNISM

A History of American Literature

From Ruland (English and American Literature/Washington State Univ.) and critic-novelist Bradbury (The Modern World: Ten Great Writers; Unsent Letters—both 1988, etc.)—a sound, balanced account of how American writers created works that reflected ``a new nation with new experience, a new science and a new politics on a new continent.'' Neither idiosyncratic nor iconoclastic, this introductory history is, though, sometimes excessively respectful toward the academically au courant. Ruland and Bradbury, an American and Englishman, respectively, nervously tip their hats to multiculturalism, and will leave their audience of general readers scratching their heads over why more attention is paid to the structuralists and deconstructionists than to luminaries like John Cheever, Thomas Wolfe, Edmund Wilson, H.L. Mencken, and Tennessee Williams. American theater (with the exception of Eugene O'Neill) is inexcusably slighted, while popular genres such as detective and science fiction are more understandably ignored. When it comes to the early development of American literature, however, the authors are on surer ground and perform ably. In tracing the transition from the allegorical mode of the Puritans to the symbolist mode of the American Literary Renaissance, they explore how ``America became a testing place of language and narrative...part of a lasting endeavor to discover the intended nature and purpose of the New World.'' By examining authors in their historical as well as aesthetic context, they make a number of connections not commonly discussed (e.g., how Mark Twain and his contemporaries missed out on the combat experience in the Civil War). Despite its unwillingness to lance some academic sacred cows, then, this is a comprehensive, often vibrant history of how American writers declared independence from older European forms before making their own unique contributions to world literature.