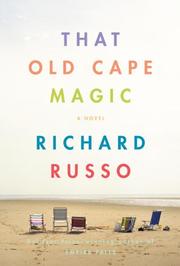 A change of pace from Pulitzer-winning author Russo (Bridge of Sighs, 2007, etc.).

In contrast to his acclaimed novels about dying towns in the Northeast, the author’s slapstick satire of academia (Straight Man, 1997) previously seemed like an anomaly. Now it has a companion of sorts, though Russo can’t seem to decide whether his protagonist is comic or tragic. Maybe both. The son of two professors who were unhappy with each other and their lot in life, Jack Griffin vowed not to follow in their footsteps, instead becoming a hack screenwriter in Los Angeles. Then he leaves that career to become a cinema professor and moves back East with his wife Joy. Most of the novel takes place during two weddings a year apart: one on Cape Cod, where Jack had endured annual summer vacations and convinced Joy to spend their honeymoon; the other in Maine, where Joy had wanted to honeymoon. Plenty of flashbacks concerning the families of each spouse seem on the surface to present very different models for marriage, and there is an account of the year between the weddings that shows their relationship changing significantly. It isn’t enough that Jack feels trapped by his familial past; he carries his parents’ ashes in his trunk, can’t bear to scatter them and carries on conversations with his late mother that eventually become audible. Will Jack and Joy be able to sustain their marriage? Will their daughter succumb to the fate of her parents, just as Jack and Joy have? Observes Jack, “Late middle age, he was coming to understand, was a time of life when everything was predictable and yet somehow you failed to see any of it coming.”

Readable, as always with this agreeable and gifted author.