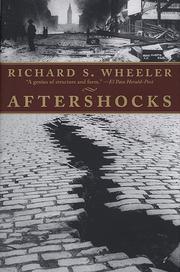 Following up on his long series of popular Westerns, Wheeler (Buffalo Commons, 1998; Flint’s Truth, 1998; etc.) jumps ahead a few years to the San Francisco earthquake. The cataclysm that leveled the city on April 18, 1906, was one of the greatest disasters of modern times, and Wheeler portrays its impact upon the high, the mighty, the desperate, and the scoundrels: people like Ginger Severance, the missionary with a heart of stone; Carl Lubbich, the corrupt city engineer who learns too late the price of his own venality; Harrison White, an ambitious architect who sees the making of his career in the ruins of a city; and the bohemian Katharine Steinmetz, whose idle photographs become keys to the city’s rebirth. Real-life figures such as Caruso and Jack London also make their appearance, although the true star of this history is the city itself, as it struggles to survive the wrath of Nature and God. Formulaic in the extreme, but the local color and historical detail move the story briskly on its way. Wheeler writes to entertain, and he succeeds admirably in his task.