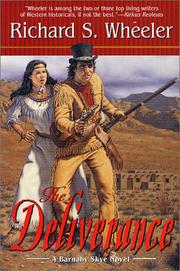 Thirteenth in the Barnaby Skye series, famed for its saddle-creaking realism and style tight as set type. In Downriver (2001), as in the overcast Dark Passage and Going Home, Wheeler took a tight grip on afflictions of the heart as Skye, in 1838, embarked on a 2,000- mile steamboat trip down the Missouri. In later episodes about the ugly-faced Mountain Man trapper and guide, Barnaby verges toward his old age in the Rockies, and so Wheeler has gone back to the 1830s and ’40s to fill in Skye’s earlier years when he was spryer and perhaps more adventurous. Set in 1841, this latest installment begins at Bent’s Fort on the Mexican frontier, with Skye having drifted down to Texas with his Crow wife Victoria. At the fort he meets Standing Alone, a Cheyenne mother who has waited for four draining years for her nine-year-old son Grasshopper and twelve-year-old daughter Little Moon to return to her. Now she has had a vision that Skye and Victoria will lead her to them, since they were stolen by the Ute Indians and sold into slavery in Mexico. On the way he meets up with the bizarre Colonel Childress from Galveston, before Skye too is taken prisoner in forbidden Mexican territory.