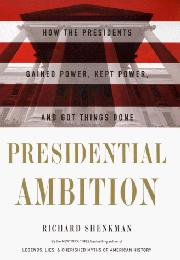 How the Presidents Gained Power, Kept Power, and Got Things Done

A timely look at the seamy side of presidential power. Many believe the morals of American presidents have recently plunged to all-time lows, reflecting path-breaking abilities to lie and manipulate in the craven pursuit of power. Investigative journalist Shenkman (—I Love Paul Revere, Whether He Rode or Not,— 1991) reassures us that, while there has been a gradual decline over time, in fact presidents have behaved this way all along. Our misperception is based on a relative lack of knowledge about earlier presidents, and he sets out to correct the record. The fundamental issue is that ascending to the presidency requires overwhelming ambition, an ambition that calls for setting aside moral niceties to achieve desired ends. As the country and government became larger and more complex, so did the need for amoral ambition to become president. This is not all bad: an effective president must act forcefully and be willing to do whatever it takes to achieve public goals. Unfortunately, history is not filled with such men who are careful to distinguish between public and personal goals. Consider the records of presidents who have sent Americans to die in wars: to acquire a great expanse of territory, Polk repeatedly lied to provoke the Mexican-American War; Wilson ran for reelection in 1916 on the slogan “He Kept Us Out of War” despite knowing the US would soon be engaged in WWI; Franklin Roosevelt copied Wilson in 1940 by flirting with isolationism rather than honestly admitting that entry into WWII was inevitable; from the very beginning, Vietnam turned Johnson into “the greatest liar in American history.” Shenkman’s scanning of a list of common political sins—election fraud, manipulation of the media, dirty tricks in political campaigns, toleration of corruption, lying to the public—reveals no recent innovations. Not a pretty picture, but a realistic one. (Author tour) (For another look at presidential ethics, see Marvin Olasky, God, Sex, and Statesmanship, p. 1779)