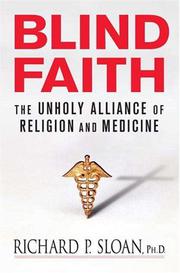 The Unholy Alliance of Religion and Medicine

Sloan (Behavioral Medicine/Columbia Univ.) takes a close look at the growing encroachment of religion in yet another sphere of American life: medicine.

In a series of well-argued, well-documented chapters, Sloan first addresses the medicine tradition in which ill health and disease were linked to moral turpitude and the displeasure of the gods. Disturbingly, he sees signs of a return of this anti-scientific attitude in the rise of religious fundamentalism and New Age touchy-feely behavior. Next, he addresses the “research” purporting to show that religiosity pays off—that going to church and praying or having prayers said for you are good for your health and lead to lower mortality rates. His arguments here form a neat summary on how science works, and on the pitfalls that can beset the design, conduct, analysis and reporting of a clinical trial. For example, the research suggesting that regular attendance at church services (as opposed to even sporadic attendance) was associated with lower mortality rates totally ignored a confounder: People who are sick or disabled are not likely to be regular churchgoers. Other egregious examples include making multiple comparisons after a trial to search for some secondary outcome measure or for a subset of patients where the findings appear statistically significant. (Chances are that such a finding is indeed by chance alone.) Finally, the author deals with the many ethical issues that arise when doctors are encouraged to take spiritual histories, ask their patients to pray or otherwise promote religion. Issues here involve the white-coated authority vs. the vulnerable patient, the lack of training of physicians in areas of religion, the trivializing of faith and even the potential for studies that would explore whether Christian prayer is more healthful than Jewish, Muslim or Buddhist.

Sloan has done well to sound the alarm, while providing an excellent primer on how medical evidence should be collected.