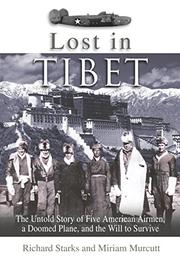 The Untold Story of Five American Airmen, a Doomed Plane, and the Will to Survive

A well-rendered story of WWII action and adventure, one with plenty of twists and operational pointers for future warriors: “Don’t cross mountain ranges. Always go down in valleys.”

The author of that tip, one of the survivors of a fallen C-87 transport plane, knew whereof he wrote. In December 1943, those GIs were flying over the “Hump,” or Himalayas, on their way home from delivering supplies to China. Blown off course by a storm and forced to ditch when their plane ran out of fuel, the men picked their way across the mountains and eventually found a Tibetan village, where they had an education in store: “If the five Americans had thought about Tibet at all,” write journalists Starks and Murcutt, “they had done so in terms if caricatures. The average American saw Tibet . . . as a kind of mythical Shangri-la, a country that existed more in the mind than in reality. It was a place they might enjoy reading about, but not one they would actually want to visit.” They were right on the last point, for the crewmen found themselves caught up in a Great Game struggle among Tibet, then still free and determined to stay that way, an expansionist China, and an always-in-the-shadows Britain. They were also in danger of being stoned for having broken a taboo, for “no Tibetan, and certainly no foreigner, was ever allowed to look down on a Dalai Lama” as from a passing plane—never mind, as the pilot observed, that any Tibetan who ventured into the hills surrounding Lhasa would stand taller than the nation’s ruler. Indeed, the US government later ventured in a face-saving effort, Tibetan forces attacked the GIs as they flew overhead—a lie, though one that helped explain away why, despite the Tibetan government’s efforts, the Roosevelt administration would never acknowledge that nation’s independence, mindful of offending China.

For fans of The Burma Road, Into Thin Air, and other tales in the man-vs.-the-elements vein.