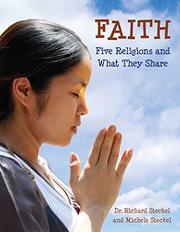 The authors assume readers will be people of faith, not atheists or agnostics. After short descriptions of each religion, common themes, such as the Golden Rule, spiritual leaders, sacred texts, clothing, symbols, places of worship, worship acts (use of incense, candles, water, and prayer), charity and cherishing children are explored. The text can be very specific, mentioning branches of Judaism (Orthodox, Conservative, Reform and Reconstructionist) without explaining the differences. (Sunni and Shiite Muslims are not delineated.) Activities will help children, teachers and parents think about religion in a comparative manner, although no sources or further reading are provided, which is a glaring omission. The attractive photos are often cropped into circular or curvilinear shapes and presented on brightly colored pages, giving the book the look of a magazine. Identified by religion but not by country, the photos were taken in the United States and eight other nations, including Mexico, Turkey and Vietnam. Interestingly, Israel and India, seemingly obvious choices, are not included. Captions would have been helpful for some photos such as a picture of a Muslim boy in a distinctive white cape and jeweled hat, which remains unexplained in the text.

A useful if occasionally preachy introduction, this book would benefit from the inclusion of more specific details, including holidays and eating customs.