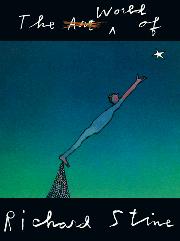 THE WORLD OF RICHARD STINE

Popular greeting-card illustrator Stine (Off to Sea, not reviewed) showcases his seductive full-color drawings and pithy texts, which give the subject of metaphysical angst in the '90s a decidedly mass-market spin. Stine's graphically striking style represents an eclectic inventory of au courant illustration techniques: meticulous and mellifluous inked line, scratchy pencil line, scumbled painted backgrounds, pasty pastel surfaces, complex webs of crosshatching, digitized computer imagery, photocopied pictorial manipulations, collage, and photo montage. Augmenting this are hand-lettered and typeset texts, which run the gamut from simple caption to poetic truism to diaristic vignette. The cover illustration sets the book's tone. In it, a thin male figure—presumably Stine—teeters atop a spirelike mountain, reaching for a single white star against a wash of azure sky. Inside, in ``Face to Face With The Second Step,'' a black dog rests on the step of an oversize blue geometric staircase, its panting red tongue playfully activating the composition. In many inclusions, lone figures are placed in psychologically charged landscapes, facing floating hearts that seem to represent love, hope, and loss. Texts—such as ``Even Lies Are Part of The Truth''—accompany some of the art. Occasionally Stine speaks of his own life: ``I think the next phase...is going to be the poet phase.'' Like illustrators Saul Steinberg, Robert Osborn, and Ralph Steadman before him, Stine has freely borrowed from the conventions of contemporary art to bring a level of perceived seriousness to his work. The plates have the look of greeting cards designed for yet-unnamed existentialist holidays. Poetic, pained, at times downright sappy, Stine's visual candy goes for the consumer jugular. Casting himself as a sensitive hero, he comes across like ``Jonathan Livingston Illustrator.'' (Book-of- the-Month Club selection)