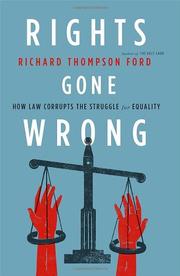 A law professor argues against the harmful misuse of our civil-rights laws.

If instances of outright discrimination today are relatively rare, we have the 20th-century's civil-rights movement and the laws it inspired to thank. Ford (Law/Stanford Law School; The Race Card: How Bluffing About Bias Makes Race Relations Worse, 2008, etc.) forthrightly acknowledges this monumental achievement, but asks if those laws are now being stretched too far to cover every type of unfairness or slight. In an increasingly ambiguous and complex social landscape, are we doing more harm than good by insisting every injury or grievance amounts to a civil-rights violation? Ford enlivens his discussion with numerous, colorful example of rights gone wrong, cases where the laws are being abused to the detriment of genuine social justice. For example, Google fires a veteran Internet pioneer, deeming him a poor cultural fit. He sues, claiming age discrimination. A fan sues a Major League Baseball team after being denied the Mother's Day goodie bag distributed to all females. Another man files suit to be a waiter at Hooters; still another repairs to court against a Manhattan nightclub for its ladies' night promotion. All claim sex discrimination. A Harvard medical student, already granted an extra eight hours to complete a licensing exam because of her ADHD, demands still more time for a breast-pumping break. The organized San Francisco bicyclists who disrupt traffic, the Million Man marchers, the Promise Keepers, plaintiffs, protesters, even the Jena Six criminal defendants—all vigorously assert their "civil rights" and all, writes Ford, injure the social compact that recognizes a corresponding duty for every right. To view every instance of disparate treatment through the lens of discrimination—at the expense of common sense, civility and pragmatic problem-solving in the public interest—is to encourage the moral poseurs, narcissists, absolutists and extremists among us and to invite a host of outrageous, unintended consequences for those the laws were intended to help.

A crisp analysis of the limits of our civil rights laws and a prescription for how to move beyond them.