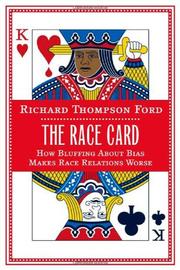 Since the 1960s, writes Ford (Law/Stanford; Racial Culture, 2004), racism has become socially and legally unacceptable, reflecting a major change in our values. Today’s racism is far more complex and ambiguous, a matter of interpretation and a card that can be played to one’s advantage. Supreme Court nominee Clarence Thomas accused his critics of bigotry; Michael Jackson blamed prejudice for his declining album sales; Oprah Winfrey suggested skin color was a factor in her being turned away by a chic Paris store; O.J. Simpson’s lawyers alleged his framing by racist cops. Since such accusations are plausible in America, Ford avers, questionable claims are often made. His reasoned text delves behind the headlines to examine these and lesser-known accusations of bias. He finds an instance of “racism without racists” in Katrina-ravaged New Orleans, where government ineptitude combined with the legacy of pre-civil-rights-era housing segregation to victimize African-Americans. Elsewhere, he sees accusations of “racism by analogy” when people charge discrimination over their size or appearance, as if to invoke the Civil Rights Act, which prohibits discrimination strictly on the basis of “race, color, sex, national origin, or religion.” Noting that there has never been a “weight riot,” he explains, “Weightism or lookism aren’t problems of social order or of social injustice.” The real danger in unmerited charges of racism, Ford concludes, is that they draw attention to trivial slights and distract from the pressing need to address larger social injustices. He writes with authority, fairness and even humor as he examines profiling, affirmative action and other issues, reminding us that we have come a long way on race but still have a great distance to go.