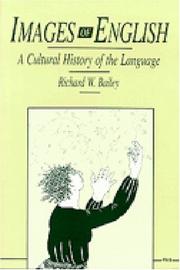 IMAGES OF ENGLISH: A Cultural History of the Language

Drawing on his vast erudition about the uses of language, Bailey (English Language and Literature/Univ. of Michigan), associate editor of the Oxford Companion to the English Language, describes the history of the cultural, social, political, and even psychological attitudes toward the English language. Starting with a discussion of what standard English is (the language spoken by educated people in the south of England, near London), he traces its history from the Norman Conquest in the ninth century through the influence of plagues, politics, prosperity, navigation, colonization, industry, scholarship, literature, even crime, each enriching and diversifying the language with new terms while provoking a reaction in those who chose to maintain or recover its purity, either real or imagined, and promote it as a universal language. Although English is particularly resistant to borrowings, it has been extremely influential, and Bailey's discussion of the effect of colonization on English is subtle, entertaining, and astute as he follows it in Ireland, Scotland, Africa, India, the Caribbean, and America, reaching into the 20th century and the fate of the language in the American colonization of the Pacific and through the subsequent wars. The nationalist movements in the various colonies and the political aspirations of various minorities such as Afro-Americans, feminists, and gays have challenged and enriched the language as they adapted it to their own purposes. Inevitable, purists have lamented these changes as symptomatic of social as well linguistic decline, and have cultivated a vision of English as a universal language--although less than 15% of the people in the world actually use it. For those interested in the social history of language, this book is exceptional, clear, and eloquent. Feminists will find Bailey's discussion of the masculine orientation of standard English particularly illuminating.