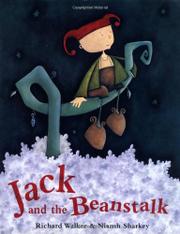 JACK AND THE BEANSTALK

Walker’s modernized retelling of Jack’s adventure up the beanstalk makes a fine counterpoint to the Beneduce/Spirin collaboration (see review, above); it’s been tamed and trimmed to a jaunty pace and filled with lively humor. All of the standard elements are present: Jack, his mother, the cow, the beans. There have been changes, however, e.g., Jack has lost his nationality, with blood that no longer smells of an Englishman. The objects of his desire—the sack of gold, the goose, and the harp—are hauled away in one clean sweep, rather than a daring, maturing series of raids. He also takes the old crone who lives with the giant, adding a touch of virtue. Finally, the beanstalk is not chopped down, but used as a catapult to hurl the giant into galactic orbit. Thus beveled and streamlined, the tale has lost some of its pungency, but, with artwork that has the color quality of old frescoes, and characters full of personality (even with dots for eyes), this remains a rousing adventure. (Picture book. 4-8)