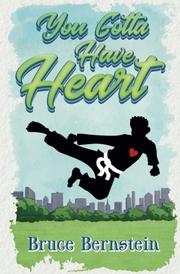 YOU GOTTA HAVE HEART

Following the deaths of his parents three years earlier, Alan Michaels lives at “Base Camp”—a home for orphaned and troubled boys. Often teased for being biracial, Alan finds community when he earns a scholarship at a dojo, Sensei Hideki’s School of Karate. He grows particularly close to classmate Dale Carroll, a successful lawyer. Dale takes Alan to a baseball game and a boxing gym and even asks Alan to lead him into the ring at an important boxing tournament. The boy dreams of being adopted by Dale and his wife, June, but soon notices something troubling—his mentor seems unwell. His concern only grows when Dale’s attendance at the dojo becomes sporadic. The author balances Alan’s lighter struggles, like impressing his crush, Kathy, with heftier topics like bullying, loss, and grief. When Dale dies of cancer, Alan, bereft, transforms his sadness into empowerment by honing his karate skills. Alan’s experiences in the world of the dojo, which Bernstein renders well, often serve him in the outside world. For example, when a bully threatens him, he reacts calmly, recalling Sensei Hideki’s advice (“Violence is not the way to solve things. Don’t look for trouble. Always walk away from a fight”). Although some may find comfort in the epilogue depicting Alan’s successful adulthood, it prevents readers from drawing their own conclusions. Each member of the multinational cast gets a complicated backstory—at the expense of momentum. Still, Alan’s likability and the depth of his relationships push the story forward. In addition, Bernstein uses the New York City setting to good effect, giving young readers background on New York City landmarks (“Central Park is almost all man made—it was mostly a rocky, swampy area that had been turned into a beautiful park”).

Inspirational, realistic fiction that will appeal to young fans of martial arts.