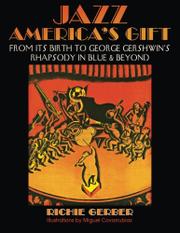 From Its Birth To George Gershwin's Rhapsody In Blue & Beyond

A cursory look at this book’s title may make readers assume that it’s an all-encompassing history of jazz music. In reality, it only covers the genre’s origins, from the birth of American song during the 18th century through the life and career of Gershwin in the early 20th century. That said, this book at least could serve as an introduction for those unfamiliar with jazz. Rather than taking a dry, academic approach to the subject, Gerber, a musician and natural foods entrepreneur, writes in a conversational, lively, and witty style, although some of the personal tangents and jokes fall flat at times: “When European high-society muckety-muck, Lady Mountbatten (no relation to Lady Gaga) heard Gershwin play….” Using a variety of bibliographical sources, Gerber paints a vivid picture of jazz’s roots in slaves’ spirituals and minstrel shows; the music’s popularity in the Storyville section of New Orleans; and the emergence of Louis Armstrong. He unearths some interesting facts, such as shared cultural experiences of African-Americans and Jews: he notes that African-American singers such as Billie Holliday and Alberta Hunter recorded Jewish songs and that Louis Armstrong so admired Jewish people that he wore a Star of David around his neck. The last two-thirds of the book, though, focuses on Gershwin, including the creation of his immortal work, “Rhapsody in Blue”—even going so far as to include a section on the famous clarinet glissando that opens the piece. It’s interesting to learn that Gershwin’s folk opera, Porgy and Bess, was initially a financial failure, and Gerber also delves into other aspects of Gershwin’s life, including his dietary habits, his relationships with women, and his love for fine art. He makes a strong, enthusiastic case for Gershwin’s contributions to jazz, something that many jazz historians, according to the author, don’t often acknowledge (“As far as George Gershwin goes—jazz can’t live with him and jazz can’t live without him!”). In addition, Covarrubias’ vibrant illustrations really enhance the text. This title shouldn’t be the first stop for those seeking an exhaustive, well-rounded survey of either jazz or Gershwin. Still, it’s an accessible overview for novices that could point them toward more comprehensive studies.

A lively, if not thorough, overview of jazz’s origins.