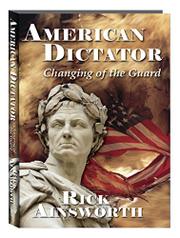 Changing of the Guard

When this tale of political intrigue begins, President Hortense Hamilton Preston is a weakened leader with rapidly diminishing approval ratings. She responds tepidly to a terrorist attack on American soil and then gets embroiled in a scandal that implicates her health care panel in comically inappropriate misuse of funds. When four Syrian fighter jets attempt to force down an American plane, she again responds with a measured caution that’s generally perceived as pusillanimous hesitation. Finally, the Mexican Army invades Texas, intent on reclaiming territory that it claims the United States stole. M. Spencer Howell, the well-regarded, charismatic governor of Florida, soon rides this wave of civic disillusionment into the White House and immediately implements a ferociously aggressive, divisive agenda. He promises mercilessly strict immigration reform, involving the deportation of undocumented Mexicans en masse. He intends to drastically cut government spending by excising a host of social welfare programs, and he pledges to rehabilitate what he sees as a decayed military and enact protectionist trade measures that would drastically redraw the nation’s economic alliances. All the while, he resorts to incendiary rhetoric that fans the flames of racial and ethnic discord. Furtively, he also oversees a secret military program called “Ezekiel’s Wheel,” which is developing a chillingly powerful weapon, and quietly constructs his own private militia for domestic use, seemingly without congressional oversight. Ainsworth deftly tracks the arc of Howell’s power as it grows more tyrannical. Even more impressive is the author’s depiction of the profound consequences of widespread disenfranchisement and the blindness of the public when it’s deeply disappointed by its supposed representatives. Sometimes it seems as if the novel is about the corruption of a politician by absolute power, but Howell shows clear signs of being an autocrat long before he becomes president. Also, the strategic scheming of Mexico and Russia is confusing, as it’s hard to imagine why it would serve their individual interests. Overall, though, this is a very timely book, given that we live in an age of national frustration, and it artfully captures the precariousness of even the best democracies.

A well-crafted parable about the vulnerability of democracy to demagoguery.