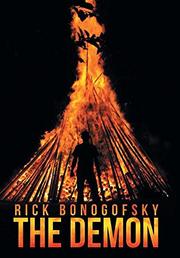 This first in a grim fantasy series recounts a millennia-spanning grudge between an angel and a demon.

Victor is an angel devoted to protecting the human race from a demon who has been wandering Earth, destroying entire cities. Dante is the demon, a traveler from a post-apocalyptic future, where Earth has been devastated by war between heaven and hell. Dante levels cities to prevent them from becoming targets of future nuclear assaults, a scheme devised by the lords of Heaven and Earth (Amun-Ra and Death, respectively) to murder thousands in order to save billions. Tormented by his demonic predisposition to delight in carnage, Dante is haunted by sadistic dreams; e.g., a tree of scorched human flesh bearing “the heads...of infants, severed and dried to cracking.” When his mission is complete, Dante returns to the future, while Victor waits thousands of years to plan his revenge. By the time that opportunity arises, Victor has learned of Dante’s motivations and seen Dante’s desire to live quietly in his own time. His hatred is rekindled by pettier concerns; Victor and Dante have fallen in love with the same woman, and she has chosen Dante. Romantic attractions happen abruptly, and the woman is often manipulated into position to motivate the male leads. For example, Death treats her as a gift: “I promised you a reward....your new fiancée is that reward.” Dante is a nuanced demon, and through him and the rest of the cast, debut author Bonogofsky continually upends simple good-vs.-evil dichotomies. There comes a point, however, when it’s no longer possible to sympathize with a protagonist who levels cities just to prove a point.

Short on finesse but may appeal to readers looking for something akin to the comics series Preacher.