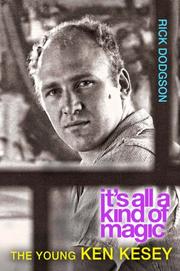 IT'S ALL A KIND OF MAGIC

A British scholar unearths the roots of one of the 20th century’s most brash and colorful writers and public figures.

Blame Tom Wolfe and that damn bus. Due to the image of novelist Ken Kesey (1935–2001), popularized in the pages of Wolfe’s The Electric Kool-Aid Acid Test, the writer has been nearly doomed to historical obscurity as the drug-addled leader of the Merry Pranksters. In fact, Kesey was a brilliant, sensitive and ambitious creator, as interested in the act of performance as he was in the accolades of critical success. In this slim biography, Dodgson (History/Lakeland Coll.) examines how Kesey’s early influences, his contemporaries and the times he was born into all shaped his evolution from literary lion to ringleader of the countercultural circus. Dodgson first met Kesey in 1999, shortly before the author’s untimely death. While the young scholar is careful not to imply a true friendship with the author, he displays an obvious giddiness at meeting the icon; Dodgson seems more in awe at Kesey’s collection of artifacts than in the man himself. The author provides a fairly straightforward examination of Kesey’s early life and works, with special attention paid to the bohemian scene around Perry Lane near Stanford University and the development of One Flew Over The Cuckoo’s Nest and Sometimes A Great Notion. Dodgson does turn up a few unexpected gems from a largely unreported era of Kesey’s life, including anecdotes about fellow travelers like Neal Cassady and Ken Babbs. But, much like the collective hangover left over from the 1960s, the book also suffers from the same revisionist romanticism that dogged Kesey’s remaining decades. “Theirs was not a revolution of guns and glory,” Dodgson writes. “It was a new type of revolution: one of morals, of manners, and of the mind.” Heavy, man.

A missed opportunity to put one of America’s truly unique writers in a larger historical context.