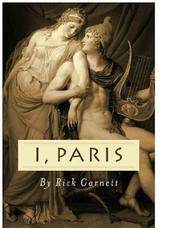 A retelling of Homer’s Iliad from the point of view of Paris, seducer of Helen.

Homer’s millennia-old story about the abduction of Helen from Sparta and the resulting 10-year Greek siege of Troy is given a fresh retelling in Garnett’s fiction debut, this time centering on the character of handsome, exiled Trojan prince Paris, a simple woodsman who one day encounters a miraculous vision: three goddesses, each of whom offers him a prize. He can choose to have wisdom, power or the most beautiful woman in the world, Helen of Sparta, wife of King Menelaus. Paris picks Helen, re-introduces himself to his royal family at Troy, sets out for Menelaus’ palace, and there finds Helen every bit as bewitching as her reputation foretold (“Words to describe her make no sense unless you see her, in which case no words are needed”). She’s also unhappy and willingly goes with Paris back to Troy. The Greeks soon follow. Readers familiar with Homer’s Iliad will know what happens next: coastal raids, battles and 10 years of conflict, during which, as Helen bitterly points out, the Trojans turn from welcoming to blaming her. They also blame Paris, who’s constantly upbraided for his blithe, carefree nature in the midst of war (as Hector puts it, “Who can blame them if they cannot endure the sight of you, so calm and cheerful in the presence of their pain?”). Garnett treats all this familiar subject matter with vivid, gripping freshness. He largely demythologizes the story (apart from Paris’ initial fever-dream of goddesses, Homer’s host of interfering immortals is absent from the book) and, instead, fills it with acute, dramatically convincing psychology. He narrates events from Paris’ point of view, and although the young prince is always feckless and self-absorbed, the reader somehow never hates him—and the book’s other characters are equally and refreshingly complex. Fans of Sarah Franklin’s Daughter of Troy and Marian Zimmer Bradley’s The Firebrand will find this an outstanding addition to the ranks of Trojan War novels.

A lyrical, outstanding modern reshaping of the ancient Homeric epic.