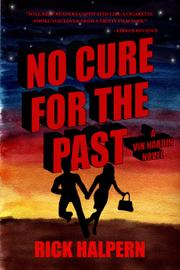 NO CURE FOR THE PAST

A tough private investigator with a troubled past searches for the killer of his mentor and father-figure in this mystery-crime thriller.

Vin Hardin, the hardheaded PI, is known in the stuffy San Fernando Valley for his ability to take a punch. Together with Det. Lopez, a no-nonsense female cop, and Jessie, a down-to-earth and caring female attorney, they search for answers. When Nate Nussbaum—the man who taught Vin everything he knows—is brutally murdered, the three try to connect the dots leading to his killer. Could it have been the target of one of Nate’s private investigations? Or one of his two troubled daughters? One of his numerous enemies out for revenge? The colorful cast of suspects comes to life in Halpern’s vivid language and imagery that weave together Vin’s pursuit. As the story unravels, Halpern bends narrative standards by resisting fixed fates and the happy ending format many readers have come to expect. This speculative side urges readers to not only keep reading but to go back and search for the minutiae that could have been overlooked. As Halpern delves into the mind of his resilient narrator, he reveals a softer side through Vin’s poignant recollections of his life as a foster child bouncing from home to broken home, or the cool, calm determination he exhibits while investigating the Nussbaum case over a cold beer and jazz. His detective dialect will keep readers captivated like a cigarette-smoke voiceover from a gritty film noir.