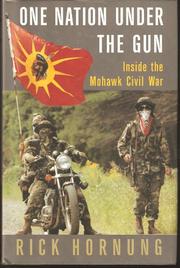 ONE NATION UNDER THE GUN

A blow-by-blow account by veteran Village Voice writer Hornung of the recent upheaval on Mohawk lands in New York and Canada, which culminated in the 1990 takeover by Mohawks of a major bridge into Montreal. Although the roots of the conflict are centuries old—the product of confinement on tiny reservations where rivalries and tensions can only intensify—for Hornung the chronology of events begins in 1987 with the seizure by N.Y. State Police of slot machines in casinos operating on the Awkwesasne reservation. This intervention by nontribal authorities, and others that followed, brought Mohawks supporting and opposing the gambling activity into confrontation—a situation exacerbated by a militant third group, the Warriors, whose position against any encroachment on native sovereignty allied them with the pro-casino faction. Roadblocks, armed displays, vandalism, and riots, and the shooting down of a National Guard helicopter ensued, with two Mohawks killed in a particularly fierce firefight in the spring of 1990. Meanwhile, Kanesatake Mohawks opposed to the expansion of a golf course onto a tribal burial ground on the outskirts of Montreal erected a barricade on the site, with their defiance increasing after an armed assault by Quebec police in which one trooper died. Seizing the Mercier Bridge, the Kanesatake Mohawks forced a tense, month- long standoff in which the Canadian Army replaced the police and were ready to move in if negotiations failed. With an agreement forged, the roadblocks fell, but Mohawk resisters, including many Awkwesasne Warriors and their lawyer, were arrested. Remarkable for letting the parties involved speak for themselves, though long on daily events and short on analysis; still, this is a good reporter's view from the scene of another sorry chapter in Native American history.