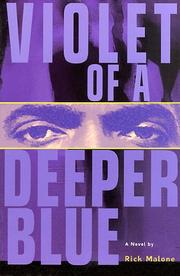 Violet of a Deeper Blue

Raised to be oblivious to race by his parents, Brandon Northcross truly believed racism was an issue of the past, defeated by the civil rights movement in the 1960s. As one of the only black students in his Dartmouth MBA program, he remains purposefully ignorant of any racism directed at him, assuming job rejections after face-to-face interviews are the result of his own deficiencies rather than thinly veiled discrimination practiced by recruiters. He is elated to land a job beneath his ability at a company with so-called progressive hiring practices. He shines in his new position and his career begins to take off despite the insinuations from his colleagues that he was only hired to fill affirmative-action quotas. Unfortunately, a hateful plan is hatched to get him fired which he, frustratingly, is too traumatized to fight. So begins Brandon’s journey to understand racism and where he fits as a black man in the business world. Though he viscerally experiences depression and hopelessness, Brandon is an inspirational character. He always manages to reeducate and rebuild himself, becoming a proud community leader. From the shut-in elderly man who collects African artifacts to the jazz musicians who introduce Brandon to Miles Davis, Malone uses secondary characters in Brandon’s journey to indirectly educate readers on black history. Some of these ancillary characters come across as very natural additions to Brandon’s life, while others feel slightly forced. The pace is at times hampered by superfluous and contrived dialogue. However, the haunting conclusion more than makes up for the plodding sections of the story.

An impressive novel about the subtle prejudice and blatant bigotry faced by black men and women in this country.