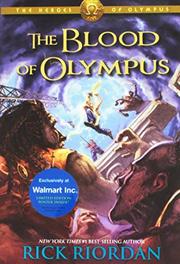 THE BLOOD OF OLYMPUS

From the Heroes of Olympus series, volume 5

With just 12 days to go until Gaea awakens fully on Aug. 1 and brings an end to the world as we know it, two groups of demigods struggle to stop her.

Aboard the Argo II, Percy, Annabeth, Jason, Piper, Frank, Hazel and Leo race to Athens for the final showdown. Meanwhile, three formerly supporting characters struggle to haul the ancient and massive Athena Parthenos statue from Europe to Camp Half-Blood: son of Hades Nico di Angelo, daughter of Bellona Reyna Ramírez-Arellano (and former praetor at New Rome) and satyr Coach Hedge. Coach Hedge is there mostly for comic relief, but his anxiety for the welfare of his very pregnant wood-nymph wife at Camp Half-Blood, where rogue New Rome augur Octavian has massed his armies to attack on Aug. 1, is touchingly genuine. The story of the demigods headed to Athens focuses on Jason, Piper and Leo and offers what Riordan does best: comedic, action-packed encounters with deities most readers—and sometimes characters—have never heard of. Goddess of victory Nike is particularly funny as she rails against "namby-pamby ideas of friendship and everybody wins participation awards." The story's emotional heft mostly comes from Nico's and Reyna's arduous and heartfelt journeys to self-acceptance. Readers who haven't made a point of revisiting The House of Hades (2013) before starting this may find themselves wondering just why each group's mission is so important, but there's no questioning that the characters think they're vital. And ultimately, any prophecy-driven adventure is at bottom arbitrary anyway. The story's occasional ventures into romance are stilted and awkward, but fortunately they are brief.

The satisfyingly cataclysmic showdowns yield to peaceful resolution at last; here's hoping it holds this time.