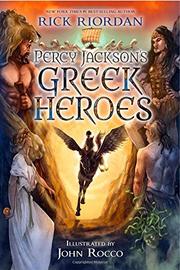 In a similarly hefty companion to Percy Jackson’s Greek Gods (2014), the most voluble of Poseidon’s many sons dishes on a dozen more ancient relatives and fellow demigods.

Riordan averts his young yarn spinner’s eyes from the sex but not the stupidity, violence, malice, or bad choices that drive so many of the old tales. He leavens full, refreshingly tart accounts of the ups and downs of such higher-profile heroes as Theseus, Orpheus, Hercules, and Jason with the lesser-known but often equally awesome exploits of such butt-kicking ladies as Atalanta, Otrera (the first Amazon), and lion-wrestling Cyrene. In thought-provoking contrast, Psyche comes off as no less heroic, even though her story is less about general slaughter than the tough “Iron Housewives quests” Aphrodite forces her to undertake to rescue her beloved Eros. Furthermore, along with snarky chapter heads (“Phaethon Fails Driver’s Ed”), the contemporary labor includes references to Jay-Z, Apple Maps, god-to-god texting, and the like—not to mention the way the narrator makes fun of hard-to-pronounce names and points up such character flaws as ADHD (Theseus) and anger management issues (Hercules). The breezy treatment effectively blows off at least some of the dust obscuring the timeless themes in each hero’s career. In Rocco’s melodramatically murky illustrations, men and women alike display rippling thews and plenty of skin as they battle ravening monsters.

Tales that “lay out your options for painful and interesting ways to die.” And to live.