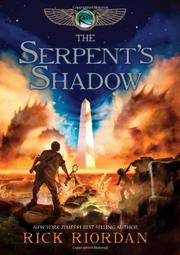 From the Kane Chronicles series, volume 3

Riordan’s Kane Chronicles trilogy concludes with a smash, as Carter and Sadie Kane once again try to save the world from the forces of Chaos.

The giant Chaos snake Apophis and his rebel magician allies are on the rise. Luckily, Carter and Sadie Kane are back, ready to fight Apophis and restore Ma’at, the order of the universe. The ghost of an ancient psychotic magician offers help: Find the shadow of Apophis, capture it and use it for an execration spell that will pop the evil god so far into the Duat—the magical realm that coexists with our world—that he will never return. As in the previous volumes—The Red Pyramid (2010) and The Throne of Fire (2011)—the tale is told in the alternating and still-fresh voices of Sadie and Carter. Beyond the explosive action and fireworks, Riordan deftly develops the theme of the duality of the universe—order versus chaos, living a normal life versus risking the extraordinary, being protected by parents versus growing up and stepping out of their shadows. A rousing adventure with plenty of magic and food for thought.

Other gods and future stories are hinted at in the conclusion; in the meantime, Riordan’s The Kane Chronicles Survival Guide is available to maintain the spell.