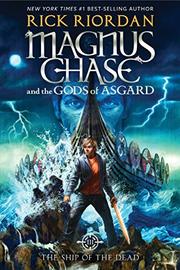 THE SHIP OF THE DEAD

From the Magnus Chase and the Gods of Asgard series, volume 3

Riordan’s third installment of Magnus Chase’s adventures careens through the Nine Worlds in a boat called the Big Banana.

The plot almost passes as a typical Riordan adventure: main quest, side quests, happy ending, new disaster looming in the future. But here, one quest confronts the evil lurking within wealthy white suburban men (well, elves). Genderfluid Alex creates a nonbinary clay warrior, drawing on her indigenous Mexican family history. Samirah’s Ramadan fast lends her focus and clarity. The villain is still Loki, but readers might see similarities to other morally corrupt leaders putting selfish interests ahead of marginalized people and their allies—with a silent, inscrutable wife at his side. No one is perfect; there’s a throwaway fat joke, and Riordan could work on refining the sign language deaf elf Hearthstone uses, which is called American Sign Language but in description is different enough to frustrate. But black, deaf, trans, Muslim, white, homeless, and formerly homeless readers will see characters like themselves cracking jokes and caring for one another, with identities that are crucial to success rather than a distraction or side issue. The climax, a deeply emotional testament to the power of community, could leave some in tears.

Riordan is again fighting for a revolution in middle-grade fiction with his funny, whiplash-fast writing and deep moral convictions.