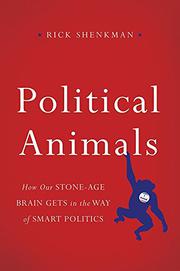 An explanation of how our brains are simply not built for politics in the modern world.

Why would a series of shark attacks along the New Jersey coast cause locals to abandon President Woodrow Wilson’s re-election bid? Why, in the immediate wake of 9/11, did support for President George W. Bush soar? Why do fans of winning football teams feel better about incumbents? Why did it take voters so long to realize Nixon was lying about Watergate and Clinton was lying about philandering? Shenkman (History/George Mason Univ.; Just How Stupid Are We?: Facing the Truth About the American Voter, 2008, etc.) answers these and many other questions by focusing on the disconnect between our brains and our instincts and emotions, powerful antennae that worked well for our hunter-gatherer ancestors gathered in tribes of about 150. These instincts fail us in the modern world, where scale, pace, and context have enlarged and quickened beyond anything our Pleistocene-era circuitry can handle. Drawing on a variety of disciplines—neuroscience, evolutionary and social psychology, anthropology, among others—Shenkman addresses our alarming indifference to politics, our chronic misreading of our leaders, our ambivalent relationship to the truth, and our frequent failure to empathize in situations that clearly warrant concern. Readers will appreciate his personable, chatty tone and will delight in the broad allusions and the wide variety of historical incidents he cites to help make his point. He examines why certain members of the Donner Party survived, why the Pentagon persisted with the Rolling Thunder bombing campaign against North Vietnam despite evidence of its futility, and why we value group membership over the truth. His call for us to recognize and account for our biases and to invoke a higher order of thinking sounds more wishful than likely, but he makes a convincing case about our hard-wired infirmities and how they work to undermine our democracy.

An amiable tour of the socioscientific evidence that accounts for our political miscalculations.