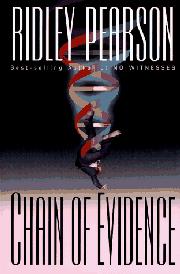 Good cops, rogue cops, and unscrupulous pharmaceutical CEOs duke it out in this near-miss technothriller from normally reliable Pearson (No Witnesses, 1994, etc.). Three years ago, Hartford Detective Joe Dartelli kept quiet about a suspicious suicide because he was convinced the victim was the Ice Man, who'd raped and killed the wife of his mentor, legendary Sgt. Walter Zeller. Now Dart is heading another suicide investigation with some eerily similar signs: an impossible physical scenario, some telltale hormonal imbalances, and the same background on the victim, another sex offender. Could the Ice Man be alive and prowling again? Or could it be, as Dart's investigation suggests, that somebody's declared open season on child molesters and domestic abusers in the greater Hartford area? In fact, could the killer be Zeller, come out of retirement to avenge his murdered wife? No sooner has Dart thought of his old boss than Zeller surfaces in a series of tantalizing phone messages``They took their own lives, but they're not suicides...Sometimes the enemy is within''and tricks his old buddies into compromising the best physical evidence against him. So far, so chillingand when Dart ties those hormonal imbalances in to a gene-therapy experiment funded by nefarious Roxin Labs, the stage seems set for one of Pearson's patented action-cum- ethical-debate showdowns. This time, though, what he substitutes is action-cum-more-action, as Zeller and Dart, spooked by a gratuitous flashback to his own abused childhood, duke it out in the dark shadows of Roxin Labs, then join forces to destroy a conspiracy that could mean the end of criminal justice as sex offenders know it. Pearson soars before he fizzles, thanks to a high-concept premise and his usual daunting mastery of forensics, computers, and blood chemistry. His fans probably won't even notice when the brains in this page-turner turn into testosterone. ($250,000 ad/promo; author tour)